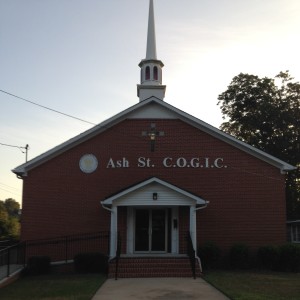 Ash Street began as a “First Born Church” sometime during the year 1910. A hunger to have more of God’s indwelling was sweeping the nation during this time in the History of this country. A prayer meeting where people were receiving the “The Holy Ghost” and speaking in other tongues out in California was what Christians were seeking to know more about in Macon and other cities in the South.

A Minister name William Joseph Seymour had attended a revival where Holiness was preached, and was touched by the Holy Ghost, began to preach the need to live lives “free of sin.” This was not accepted by other Christian Denominations in this area. Other Christians who believed that God was speaking through this man of God was ready for “Pentecost” to come into their lives and began to hold prayer meetings in a house on Bay Street where they prayed to receive the “Holy Ghost.” Ash Street is significant in the history of “Holiness Churches” in the Southern locales of Georgia because it all began here.

The little house on Bay Street became a Church. The church membership continued to grow and a new location was required. In fact it would need to move several times before moving to Ash Street because of membership growth.  Just helping one another and praising God was all the Church membership was concerned with at that time in its history. Erecting a beautiful building to worship in was not its priority. The First Born Church joined the Church of God in Christ movement and made its final move to Ash Street where it has remained until now.

There was a great respect and desire to find God. Ash Street was a place where many sin-sick souls turned for solace. The Pentecostal movement was sweeping the country and many lost souls in Macon were ready to receive the “Holy Ghost” according to Acts 2:4. Ash Street was the known place to come and seek for the “Holy Ghost” and they did come; and God met them and many were saved and added to the Church membership.

Bishop Fred Winans, a well-known Bishop in the Church of God in Christ, moved to Macon from Greenville, Mississippi and became the first appointed Pastor of Ash Street Church of God in Christ. After several years Bishop Winans was sent to Pastor another Church and had to leave Macon. Overseer, Bishop Riley Williams was appointed to Pastor Ash Street until Elder Lowery was sent to become Pastor. After several years Bishop Winans returned to Pastor Ash Street again until his death.

One cannot speak of Ash Street History without mentioning the contributions of the following saints: Bishop Winans and his powerful preaching, Mother Ada Gore and her prayers and teachings with only one thing in mind; pray until the unsaved are saved, even if it takes hours; Missionary Bessie Anderson, who sang souls to submission to Christ, Deacon Losey, and Brothers Thomas, Bowden, Todd, Stephens, Bivens, Reynolds, Johnson, and Giddon; all men who worked untiringly to make sure God’s work continued and there was a place for lost souls to come and fine hope.

After Bishop Winans died Bishop C. J. Hicks because the Pastor of Ash Street.  After the death of Bishop Strickland, Bishop Hicks became Bishop of the Southern Georgia Jurisdiction.

Bishop Hicks was a leader who felt the Jurisdiction needed to be built up. He felt that he needed to be away from Ash Street for much time in order to help the churches in his Jurisdiction; so he appointed Elder William Greene to be his Assistant Pastor in 1971. Bishop Hicks’ health condition caused him to not be able to attend church regularly beginning in 2000, and Elder Greene was appointed Pastor of Ash Street and served in this position until his death in 2002.

Under the leadership of Elder Engram, the church has continued to “Move Forward and Upward in Jesus Christ,” as the vision was given to him by the Holy Spirit.  The church’s first steeple was installed in 2010.  Our church was renovated and re-dedicated in January 2014.  Elder Engram is passionate about the saints praying always, without ceasing, and implemented a 24-hour prayer ministry.

This Church has served the community in many ways. Whenever needs have been made known of those who have lived in the neighborhood, whether members of Ash Street or not, the members of this Church were always available and ready to help.  In this world of turmoil and at this time when love for one another has waxed cold in our society, Ash Street is determined to remain in this neighborhood as a light in the midst of much darkness. The prayers of long ago, by so many concerned saints, that every souls is worth saving, is still what motivates the saints at Ash Street to pray for all mankind and remain here as a place of refuge for anyone who needs a “hands up.” If staying in the neighborhood and being a Beacon of light in the midst of all of the darkness in our world is Ash Street’s calling in this world, then Ash Street will be here.